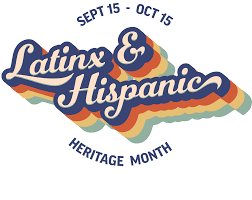 Hispanic Heritage Month (HHM) is celebrated annually from September 15-October 15 to acknowledge the history, culture, and contributions of Americans whose ancestry can be traced to over 20 countries in Latin America, including Mexico, Central and South America, and the Caribbean. In the United States, there are approximately 60 million people who have ancestries connected to these countries who reside in the United States, representing approximately 18% of the U.S. population. Many labels are used for this panethnic group, with the most common umbrella terms being “Hispanic” and “Latina/e/o/x.” HHM serves to highlight how Hispanic and Latinx communities have contributed to American society at large.

Hispanic Heritage month  actually began as a commemorative week when it was introduced in June 1968 by California Congressman George E. Brown. The push had gained momentum throughout the 1960s when the Civil Rights Movement was at its peak and there was growing awareness of America's multicultural identities. On September 14, 1989 President George H.W. Bush officially declared the 31-day period from September 15th to October 15 as National Hispanic Heritage Month. HHM coincides with the independence day celebrations of several Latin American nations. The start of the month, September 15th, was chosen as the kickoff because it coincided with the independence day celebrations of five "Central American neighbors," as Johnson called them — Costa Rica, El Salvador, Guatemala, Honduras, and Nicaragua. Mexico also celebrates independence during the month on September 16th, while Chile holds its Fiestas Patrias on September 18th. Belize celebrates on September 21, and Puerto Rico on September 23.

As the Notre Dame Club of Inland Empire, we highly recommend joining local celebrations throughout Riverside and San Bernardino counties.

Join us for this free, family-fun event celebrating Hispanic Heritage, arts, music and culture at Miller Park Amphitheater, located at 17004 Arrow Blvd., from 5 p.m. to 8 p.m.