Approaching our 40th ND reunion, I started tracking down the 34 classmates from Notre Dame High School in Niles, IL, who had also graduated from the University.  A few of us had relocated to the west, including Jim Starshak in Hawaii, Al Loboy and Chuck Reali near Portland, Ed Callahan and Don Stevens near Phoenix, and three of us – Terry Casey, Joe Doherty and myself – in Southern California.

Every year I get in my Porsche Boxster (CA plates "ND 66" of course) south of LA, put the top down and drive roundtrip to Laguna Seca, the best racetrack in North America, on the Monterey Peninsula south of San Francisco.  The ride up the Pacific Coast, through the coastal wine countries, on marvelous twisty roads (James Dean was killed on one of them headed to Laguna Seca in his Porsche) is my favorite drive each year. 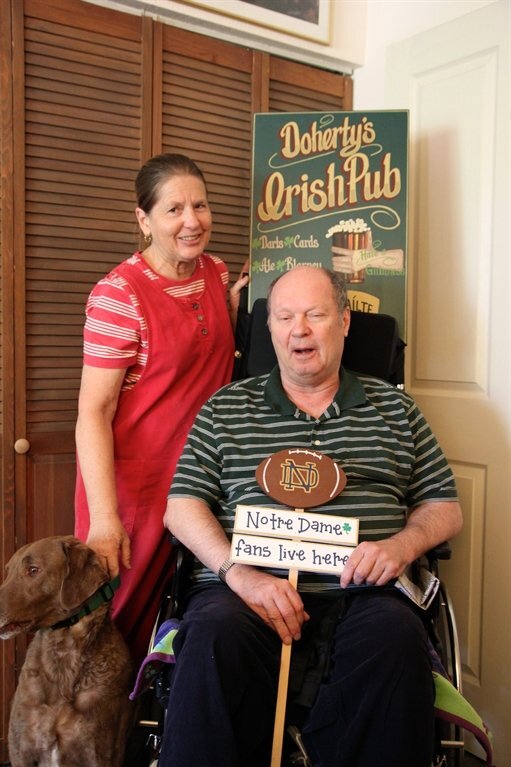 Joe Doherty lives in Santa Ynez, a marvelous wine valley north of Santa Barbara made famous by the great flic Sideways.  In July of 2011, I called Joe’s wife, Susan, to ask if I could stop by on my way back from Laguna Seca and reconnect with Joe after 45+ years.  I had learned from John Devona (Western Springs, IL), Joe’s high school classmate and college roommate that Joe was now confined to a wheel chair and couldn’t travel any longer. I was fresh from our 45th reunion and wanted to share stories and photos of classmates with him.

After ND, Joe attended the University of Missouri at Columbia graduating with an MBA before his AFROTC commission sent him to Wright Patterson AFB to work on the B-1 bomber project.  After his Air Force tour of duty, Joe went to work for the Veteran’s Administration in Washington, D.C. where he was fortunate to meet a gal named Sue.  The two were married in 1976 and lived for two years in Chicago where their daughter Eileen was born.

Shortly after transferring to the VA Hospital in Long Beach, CA, Joe opted to return to the Air Force in 1980 working in civil service at Vandenberg AFB on the launch pad refit for the Space Shuttle.  The Dohertys have lived in Santa Ynez ever since.

Over time, Joe’s health declined and he eventually retired from the Air Force five year ago.  Joe made it back to Notre Dame for our 40th reunion with his old roommate, John Devona, wheeling him around in his wheel chair. His son, Brendan, a Notre Dame grad, recently moved back to the valley to establish a law practice, while Eileen is now married and living in Hermosa Beach, CA.

Nowadays, it’s hard for Joe to travel but he loves having friends, especially Irish lads, visit.  So, do what I’m going to do next July…grab a local bottle of wine and stop by and tell Joe and Sue some more stories of the class of ’66.

Editor's Note: Unfortunately, Joe passed away on February 16, 2016 due to complications from pneumonia. His family hopes to return Joe's ashes to his beloved Notre Dame in the fall of 2016. Our prayers and best wishes go out to his wonderful wife Sue, his Domer son Brendan and his daughter Eileen.