Hard to believe that Bill Dwyre’s first talk to a Notre Dame group was today at the Senior Alumni’s monthly luncheon in Orange County. Bill explained to the SRO crowd that he spent so many years trying to be impartial as the Sports Editor and later Featured Columnist of the Los Angeles Times that it caused him to be conservative with his Irish emotions. 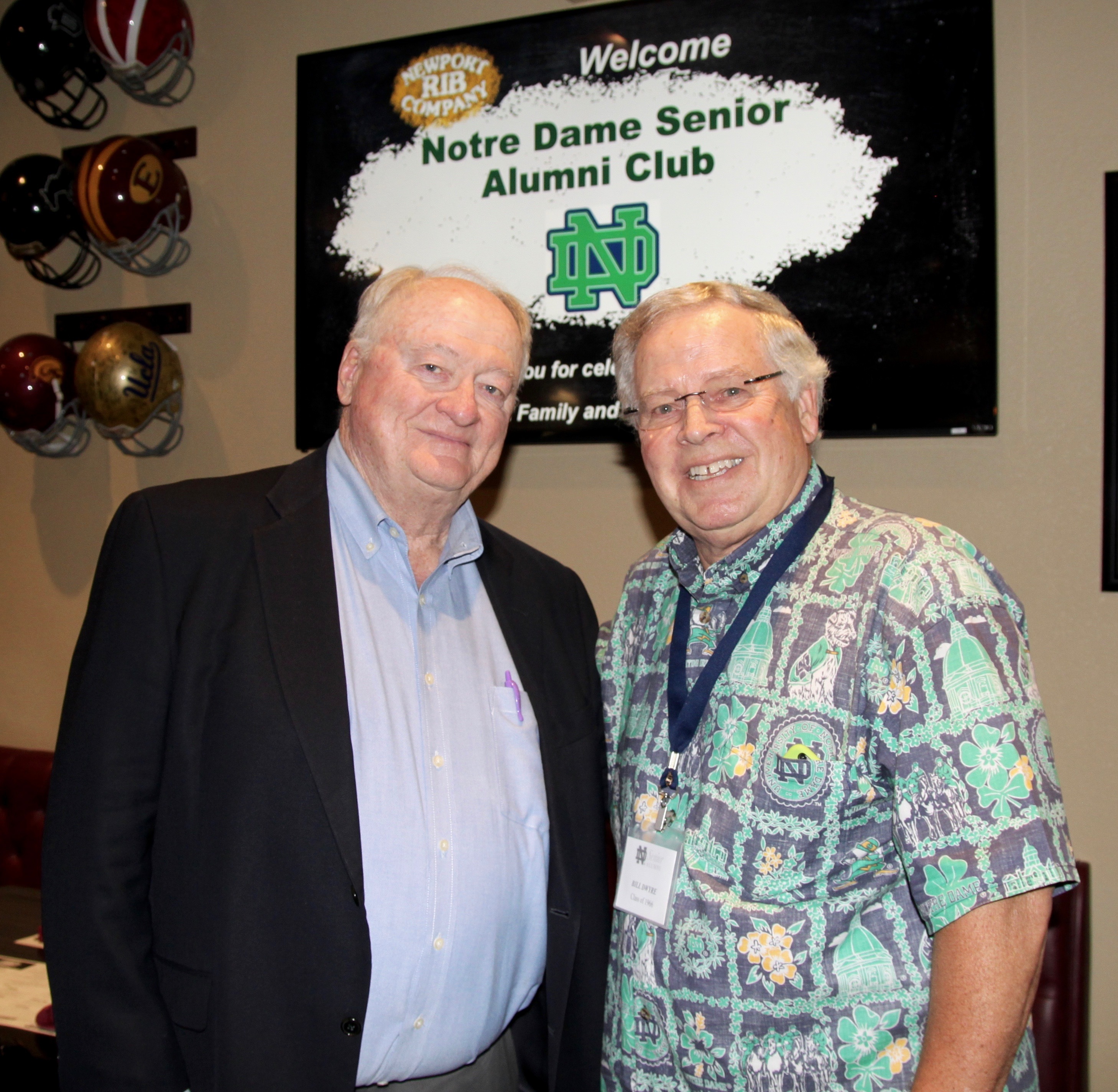 Although relatively quiet spoken, Dwyre let his Irish show in his talk. I really wish that Jim Murray and Red Smith, two of the greatest sports writers ever, were available to write this piece to do Bill justice, but here’s my best shot at summarizing his talk.

Bill was an under-sized, All-State basketball player out of Sheboygan, WI, who received a “full ride” to Duquesne. Fortunately, his father decided that the only place his red-headed (who remembers that), Irish son was headed to was Notre Dame.  Dwyre related his experience of trying out for Coach John Jordan’s basketball team as a freshman against a bunch of behemoths. Made it to the final 20 before he was cut, so he called his Dad to come pick him up and his wise father once again told him he could hike home with his huge trunk if he wanted to leave.

Bill’s decision to stay was rewarded in his first Communications class where he met several legendary classmates: Don Ohlmeyer, Robert “Sam” Anson, and Barry Lopez. Their assignment was to write one story and sell it to a national publication…Dwyre was the only one to “ace” the class as he sold his story to Boy’s Life”...and so a career was launched.

It didn’t hurt that his Farley roommate was George Blaha, the legendary NBA announcer of the Detroit Pistons. Bill related numerous stories of his escapades with Blaha at ND and throughout their careers.

Wrt to the USC Trojans, Dwyre told many stories about the rivalry, including the day he started as the Sports Editor in 1981 Mal Florence, a noted LAT sports writer and Trojan “homer,” had the entire USC band come to his office to the play “Fight On.” Bill returned the favor several years later when Florence covered a USC game at ND.

Bill’s best ND football story involved Tommy Lasorda of the Dodgers. Lasorda and Dwyre were at ND for a game with Tennessee. Tommy was scheduled to give the pre-game speech to the team. Lasorda boasted that the no team ever lost after his pre-game pep talk. ND did and Bill called him Monday morning to correct him. Not to be undone, Tommy responded that ND was leading at the half when he had to leave!

Dwyre was asked many questions by the senior alumni, including his definitive opinion of ESPN, sports talk radio/TV, Kobe Bryant, the great Vin Scully, his beloved brother Jim Murray, his favorite LA sports teams, etc. Hopefully he can tell more of his stories at the reunion.

Before closing though, Bill took the time to speak about his admiration for Pete Duranko and the current ’66 class fundraising effort for the Duranko Foundation. Class act as always.

Bill’s one of the best and the brightest of not only our class but of Our Lady’s University.

Before leaving I begged Bill to do three things: start writing a blog, publish an anthology of his sports writing, and come to the reunion. You can also reach out and encourage Bill at billpatdwyre@gmail.com.

Bill’s many accolades can be viewed at https://en.wikipedia.org/wiki/Bill_Dwyre.