I was honored about five to six years ago by Rome to become a member of the Order of Holy Sepulchre of Jerusalem that goes back to the Crusades. The mission of the Order is to support and sustain Christians in the Holy Land (Catholics in the Holy Land are primarily Palestinian Arabs, but there are some Hebrew speaking Catholics). Catholics comprise about 2% of the population of Israel and the West Bank. 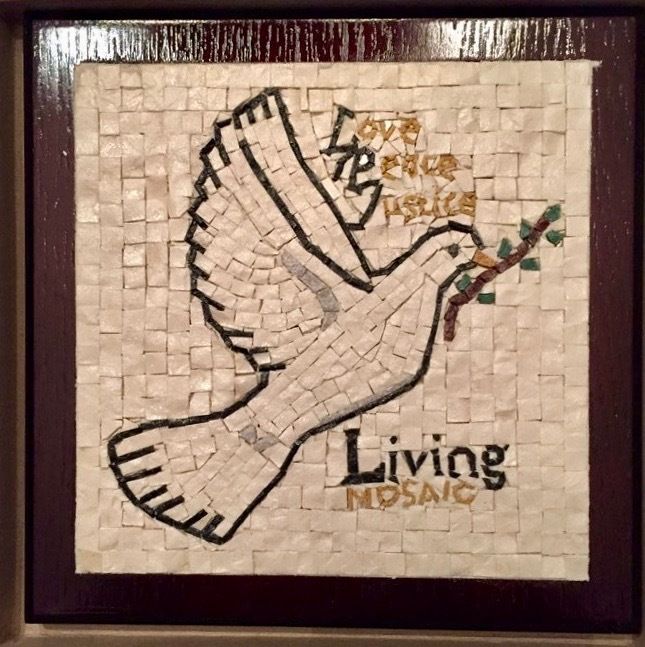 The Latin Patriarch in Jerusalem gave me this mosaic made by Iraqi Christian refugees in the Holy Land. The Church teaches these refugee artisans how to make mosaics. The refugees have a livelihood and grow in the faith too!

The Order provides financial support for over 70% of the charitable work of the Latin Patriarch including the necessary funding of a hospital, a seminary, a university, and over 50 schools.

Our pilgrims from the Order of the Holy Sepulchre visited Caritas hospital in Bethlehem (a baby hospital - how appropriate!) and met the doctors and hospital staff who treated us to a wonderful reception. We also met with the teachers and inquisitive students at Bethlehem University, and had a wonderful luncheon and discussion with the students.

We also had an extraordinary meeting with Fr. David Neuhaus, S.J., a migrant Jew and convert from South Africa whose family fled Nazi Germany.  Fr. David told us his story, that he was an Orthodox Jew from South Africa whose parents sent him as a teenager to study Judaism in Jerusalem. He told us he met someone who he never expected to meet in Jerusalem -- Jesus Christ. He told us he tried to get Jesus out of his mind because Jesus did not fit into his Jewish family in South Africa.

Fast-forward over ten years, his parents accepted his conversion to Roman Catholicism, and he was ordained a Jesuit priest. After obtaining his doctorate in Jerusalem and teaching Jewish studies, the Pope asked Fr. David to be the Patriarchal Vicar of Hebrew speaking Catholics.  The Pope also asked Fr. David to write the Mass in Hebrew (there had been no Hebrew Mass) and also translate the Catholic catechism into Hebrew.

Fr. David is the pastor of Hebrew-speaking parishes in Jerusalem and Tel Aviv and ministers to Hebrew speaking Christians throughout the Holy Land. He told our group on pilgrimage how joyous it is to have met Jesus in Jerusalem!