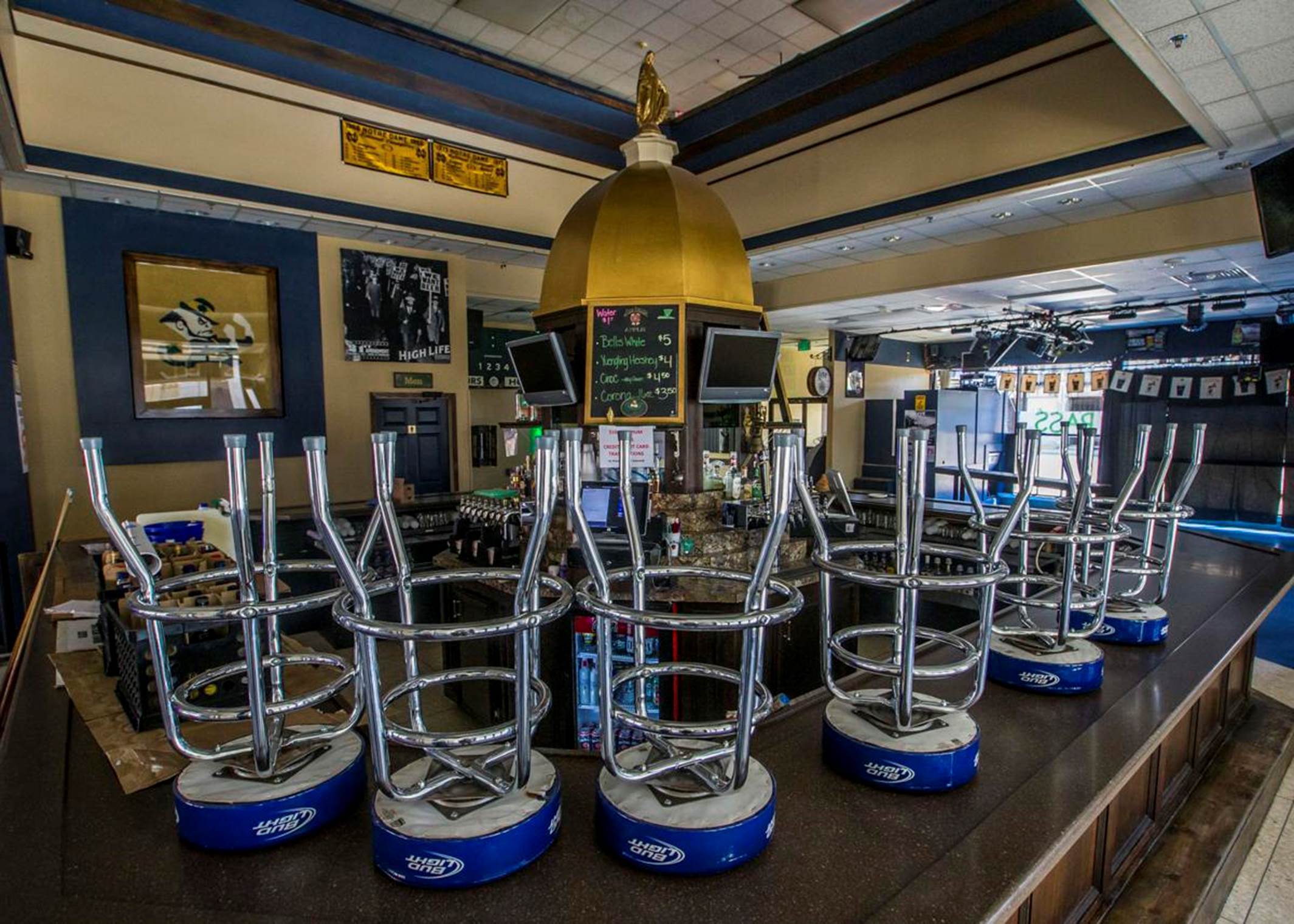 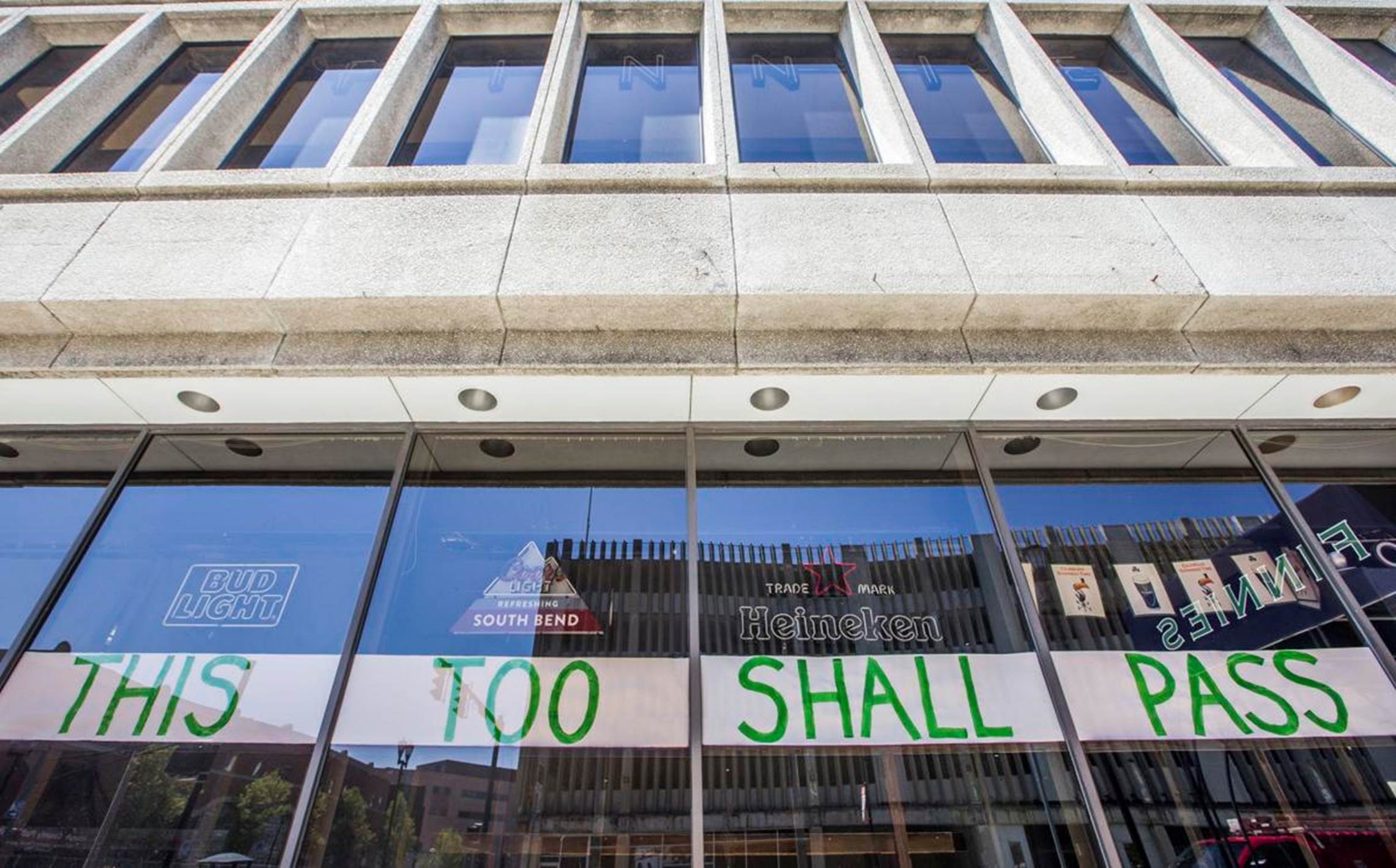 Rick Ruszkowski would normally be worn out today.

As the owner of Finnies Next Door, a popular college bar at 233 S. Main St. in downtown South Bend, he would have spent the past several days serving a packed house of students and parents celebrating the end of college life at the University of Notre Dame.

“It would be very difficult to survive without the students and the fans that come to town,” Ruszkowski said. “It’s like thinking about death.”

For the university’s commencement, now being held virtually, nearly every hotel room would have been booked the past several days.

Visitors would have been streaming through the airport and restaurants, while bars and caterers would have been operating at full capacity — nearly the equivalent of an additional home football game, each of which is estimated to provide a $17 million boost to the local economy.

“It’s our busiest weekend of the year,” said Kurt Janowsky, the owner of Navarre Hospitality Group. “Commencement is a four-day extravaganza. Our restaurants and catering are incredibly busy, so losing it is like a body blow to South Bend.”

Janowsky estimated that he already has lost about $3.5 million in revenue at his four restaurants — Cafe Navarre in downtown, O’Rourke’s Public House at Eddy Street Commons, Rocky River Tap & Table in Mishawaka and Artisan in Elkhart — and his catering operations because of the coronavirus pandemic.

But as he works to restart operations, he admits he’s most worried about O’Rourke’s because it’s directly across from Notre Dame and has considerably higher rent because of its location.

Though Janowsky works to draw in customers from outside the immediate area, the success of O’Rourke’s is largely tied to Notre Dame because of its proximity to campus and its Irish theme. The restaurant serves as the venue for basketball coach Mike Brey’s radio show and has done the same for football coach Brian Kelly and Muffet McGraw, who recently retired as the women’s basketball coach.

“O’Rourke’s is definitely our most vulnerable location,” Janowsky said.

Heading into the typical summer slowdown for businesses near campus, he worries about the impact on O’Rourke’s if Notre Dame limits attendance at football games and even tailgating this fall. University officials have said they’re confident about games returning in the fall but have acknowledged that the stadium would not be at full capacity.

Those concerns are shared by dozens of businesses and thousands of workers in the South Bend area.

“The biggest fear for every person in my job is the loss of football,” said Rob DeCleene, executive director of Visit South Bend Mishawaka. “The impact on the community would be devastating.”

Even thinning attendance at the games and tailgating would be a further blow to the local hospitality industry — hotels, restaurants, caterers and attractions — which employs about 7,700 people locally and already is getting hammered by the coronavirus slowdown.

The hit to football attendance would also be a blow to the local home-rental market, which creates lucrative ways for homeowners to supplement their incomes and helps draw people to town.

A 2016 study by NerdWallet ranked South Bend as the nation’s third hottest home-rental market for college football games, behind Ann Arbor, Mich. and Tuscaloosa, Ala. Thousands of homes in the region are rented during football season, through Airbnb, VRBO (Vacation Rentals By Owner), HomeAway, Rent Like a Champion and Gameday Housing, among others.

On a normal Notre Dame commencement weekend, the numerous hotels operated by South Bend-based JSK Hospitality would have been at least 80% full, said Kristina Palmer, vice president of sales and marketing for the business.

Because of the coronavirus and the slowdown in travel, JSK hotels have been averaging about 15% occupancy, while normal runs anywhere from 53% to 63% during the first five months of the year,.

“We had full calendars that were erased clean,” Palmer said.

Though business leaders are worried that South Bend will start wheezing because of the potential limits on football and other activities, other college towns across the nation could be in even worse shape.

Over the past 50 years, American universities have become economic goliaths far beyond what they had been, said Alan Mallach, a senior fellow at the Center for Community Progress who studies urban planning and growth and the author of “The Divided City.”

It was over those five decades that universities really started to grow, fueled by major research funding and graduate programs. As universities grew, towns became increasingly reliant on them for employment and business. New Haven, Conn., for example, was an industrial town in the 1950s with a university in the middle of it. Today, Yale University is the primary employer and economic driver in New Haven after the manufacturing industry has all but disappeared.

“And so [college towns] are extraordinarily dependent on the health of the university as a generator of the city’s economic health,” Mallach said.

Cities with high-level, four-year universities see an extra $265,000 a year economic boost for every student enrolled at the school, according to a 2015 study from the Brookings Institution. The result is a thriving but small, business-rich local economy with a highly educated and wealthy population.

“College towns, not surprisingly, always stand out as these kinds of places that are doing far better than you would expect, because they have this secure employer there,” said Jennifer Mapes, a researcher at Kent State University who studies the economic impact of higher education.

Notre Dame is no exception. The university commissioned a recent study that concluded the institution’s annual economic impact to the region — everything from employment, to research spending, to event attendance — was $2.46 billion.

Even with the current lack of students and events, the university hasn’t announced any massive measures as a result of the coronavirus. So far, there have only been hiring freezes, travel cuts and some other belt-tightening.

That means the university could serve as a recessionary buffer, even though some of the bars, restaurants and hotels might feel the pinch from reduced activities.

But that’s what keeps Ruszkowski up at night.

Having developed and built Finnies for Notre Dame students and fans, he wonders what will happen if those students don’t immediately return to campus or are precluded from filling the two-story sports bar which is stuffed with 600 people on busy nights.

With a dance floor as well as pool tables, air hockey and numerous other games throughout the establishment, Finnies isn’t built for social distancing. It’s built for mingling and hanging out with friends.

“I really feel very, very sad for those kids and the experiences they missed,” said Ruszkowski. “They didn’t have the opportunity to celebrate the end of college with their friends and family. They won’t have the memory of walking across the stage to get their diploma.”

Some have talked about a Finnies reunion in the future. But first, the business needs to get through the immediate future.

Congratulations to the Class of 2020!

May 16 All News — Camaraderie

Okta
Or
Or
If you’ve linked your account to one of the following social networks, please click on the relevant icon to log in
Not a member yet?
Register