As the ND Boston Alumni community continues our series recognizing Gay Pride month, we want to celebrate the many positive steps toward inclusion of all members of our ND family.  However, more work still needs to be done.

During the more than five years of harassment, ~ 30 pieces of mail was sent to the couple’s home. They were concerned their seven-year-old son would start to be impacted and that things would escalate beyond just receiving mail.  Every day they were scared to open their mail wondering what they would find next.  As shared by McLean “It brought me back to being a little kid and getting teased for my voice or my appearance.  We were being picked on because we were gay, and it had followed me into my 40s. I couldn’t believe it.”

Through a stroke of luck, and with the help of a community member, the perpetrator was recently found and confessed.

Even though this had a significant impact on Furze, McLean and their son, they decided to turn the experience into something positive.  They decided to make #IAmMichelleFruitzey T-shirts and sell them to donate to Gay Straight Alliance organizations at local schools.  People around the country have already started ordering raising over $25,000.

“We wanted to take something that was really tough and use it as a way to support and empower young people,” Furze said. “We want to turn Michelle Fruitzey into a superstar and allow her to spread the message that bullying, in all its forms, is not OK.”

Furze said he hopes their story encourages others, including their son, to stand up to bullies who target marginalized people. But he also hopes it serves as a reminder that hateful people may exist in any community, no matter how accepting most people may seem.

“They are among us, and we need to be vigilant to protect our children, our peers and each other,” he said.

To read the full story, go to:  Gay Couple Harassed For Years. 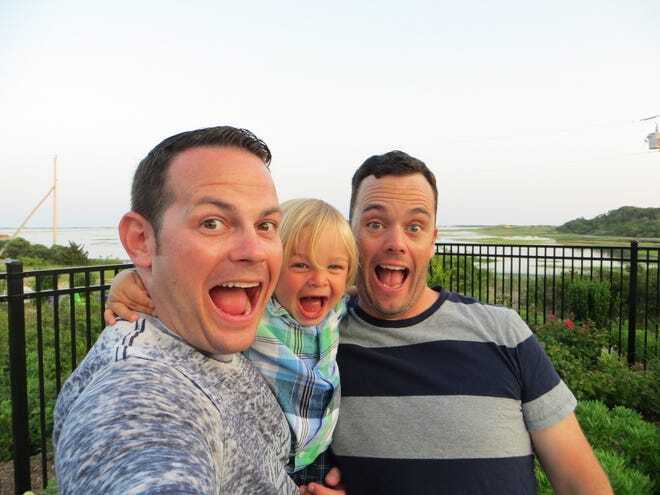 *Bryan has been active in the ND Boston club for years and started the Young Alumni group sponsoring many social activities.  He was named Young Alumnus of the Year in the early 2000’s.