During the past 25 years or so, Notre Dame has grown considerably in its programs focusing on “entrepreneurship”.

Prior to that, ND, like a lot of the “elite” colleges had not had a strong “vocational” element to its curriculum and prepared its students more for graduate school than attending to the skill sets necessary to create a business.

Here’s one of the many successes ND has had in growing the economic engine of America:

The IDEA Center at the University of Notre Dame surpassed its goal of creating 16 faculty and student startup companies in its first year by launching 27 companies between July 2017 and June 2018.

That number nearly equals the total number of startups, 33, in the University’s entire 175-year history prior to 2017-18, and it exceeds by a wide margin the previous single-year record of three startups in 2016.

“The IDEA Center and its team members have done a wonderful job during their first year translating faculty, staff and student ideas into innovation success stories,” said Thomas G. Burish, the Charles and Jill Fischer Provost at Notre Dame. “In the process, they also worked with others at the University and throughout the South Bend-Elkhart region to create tremendous energy and enthusiasm among those with the passion and drive to see their ideas through to successful launch.”

To qualify as a startup, companies must be licensed as a business, have a business plan and management team, and have completed the IDEA Center’s “de-risking” process, which assesses innovative ideas for their market potential. 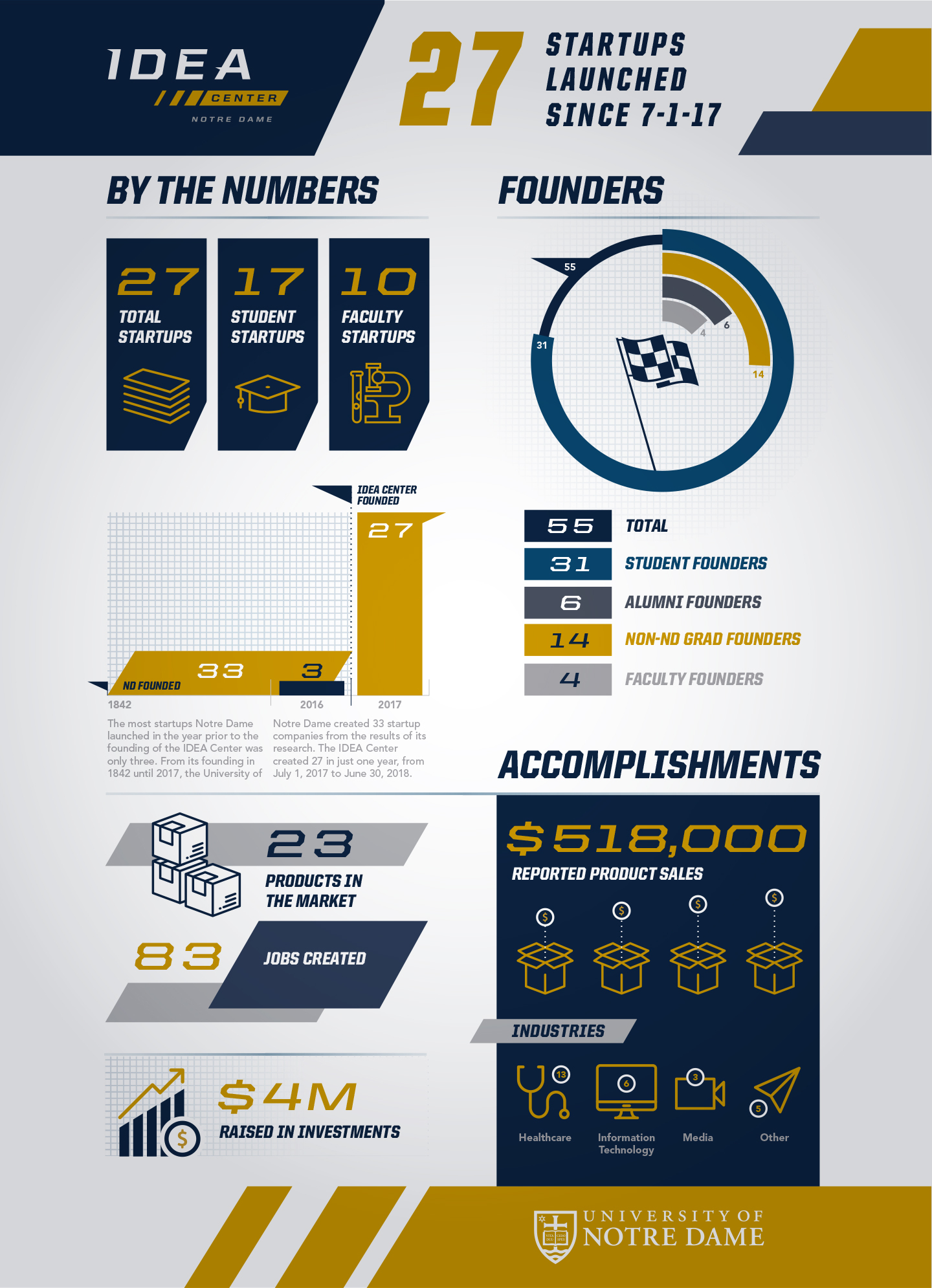 Among the 27 startups are companies involved in health care, information technology, law and media. Collectively, the companies raised more than $4 million in investments or grants, created 83 new jobs, launched 23 products and generated more than $500,000 in sales.

Thirty-one of the 55 startup company founders were Notre Dame students.

“The success of the IDEA Center’s strategy indicates that a strong focus on startups in the South Bend-Elkhart region will lead to the potential for significant economic growth, such as that seen in other technological hub cities in the country,” said Bryan Ritchie, associate provost and vice president for innovation. “In time, we believe this region will retain and attract even more of tomorrow’s brightest, most innovative minds.”

The IDEA Center opened in early 2017 with a mission to find commercially viable, early-stage product ideas and innovations from Notre Dame faculty, staff and students and shepherd them to the marketplace.

“Startups are one of the main driving forces behind the U.S. economy in the 21st century,” Ritchie said. “They are responsible for nearly all net job growth in the country, experience growth rates substantially higher than other firms, help create wealth and have a profound impact on overall economic productivity in our economy.”

The IDEA Center has set a goal of creating 30 startups for fiscal year 2018-19 and plans to increase the number each year. Over time, the aim is to build an ecosystem of high-potential startups in the South Bend-Elkhart region that grow rapidly and then attract venture capital, entrepreneurs and an increasing number of startups that create more jobs, all in a virtuous cycle of economic development.

“60 to 70 percent of all startups fail,” said James Thompson, associate vice president for innovation. “While not all of our startups will survive, our comprehensive de-risking and vetting process, which we call the Commercialization Engine, will likely result in a higher success rate than the average.”

“By producing startups, the IDEA Center lies at the heart of economic growth in this region,” said Ritchie. “The future of the American economy isn’t industry, it’s innovation — and we want to be at the forefront of this revolution.”

Standing for Innovation, Derisking and Enterprise Acceleration, the IDEA Center is the fundamental resource for all commercialization and entrepreneurial discoveries at the University of Notre Dame. Its goal is to translate staff and student discoveries, launch startup companies and leverage meaningful partnerships for social and commercial benefit.

For more information about each of the 27 startups and the IDEA Center’s mission and economic vision for the future, visit https://ntrda.me/2L0U5tY.