Chuck Nigro (Olathe, KS) emailed that he and Dick Frey (Shawnee, KS) attended the 85th anniversary of Knute Rockne’s death on March 31, 1931. The program was held on April 2 at the crash site. Chuck reports that about 200 people attended, including Nils Rockne, Knute’s grandson. 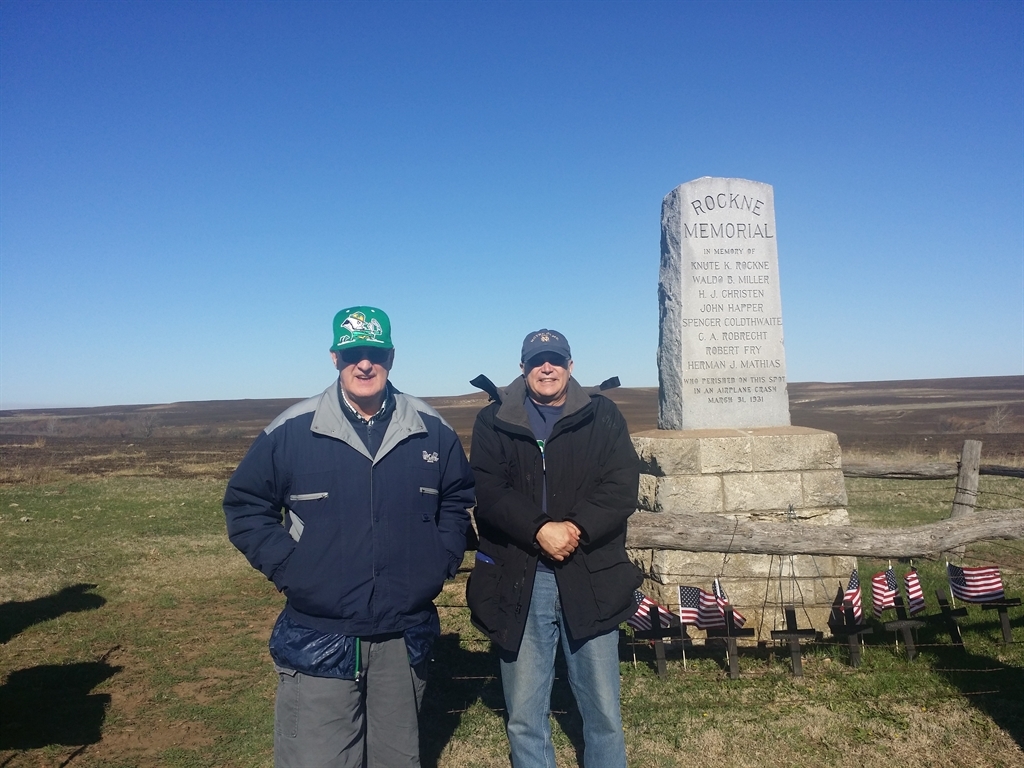 Editor’s Note: I just finished reading “Coach for a Nation; The Life and Times of Knute Rockne” by Jim Lefebrve. Lefebrve was a guest speaker at a recent NDSA of Orange County luncheon.

I’ve read many books about Rockne over the years but none with such great detail. Rockne left his family on vacation in Florida, visited his mother in Chicago and took the train to Kansas City where he had breakfast with Dr. Mike Nigro, a close friend from his undergraduate days, on Tuesday, March 31. Rockne planned to fly from Kansas City to Los Angeles for a number of reasons, including negotiating an extension of the football series with USC.

Rockne’s Transcontinental & Western Flight #599, a Fokker F10A Trimotor, encountered a storm on its way to Wichita and crashed on the Baker ranch in the rolling Flint Hills of eastern Kansas.  Rockne’s body was escorted back to campus by his dear friend, Dr. Nigro, who stayed at Bonnie Rockne’s side through the funeral and graveside ceremony.

More from Chuck: He was my uncle. He was an ND classmate of Rockne and they became good friends staying in touch over the years. He identified the body after the crash. Two of Rockne's sons (Bill and Knute) were going to Pembrook Day high school in KC and being watched over by my uncle at the time of the crash. If you ever see the movie “Knute Rockne All American” notice that when Rockne gets on the plane he turns around and waves and says ‘Goodbye Doc’ to my uncle.

A small but avid group of ND grads and supporters setup a memorial event every five years at the crash site. This also includes honoring the men and families of the other passengers that died in the crash.

Many thanks to Chuck Nigro for the memory! Chuck can be reached at cnigro22@comcast.net or hopefully at the reunion where he can tell more stories about Rockne.