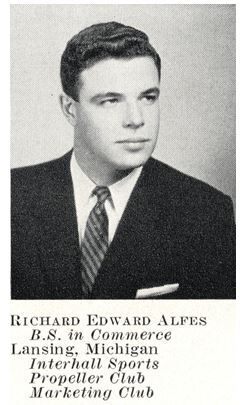 Dick was a 1951 graduate of St. Mary High School and of Notre Dame University with the class of 1955. Following service in the U.S. Army he began his career with General Motors from which he retired.

He was preceded in death by parents, John and Violet Alfes, and brother, John Alfes (Mary) of Waterford, MI. He is survived by son, Stephen Alfes (Wanda) of Lansing, and sisters, Elizabeth Luck of Overland Park, KS and Margaret Massey (Don) of Suwanee, GA. A service will be held in Lansing later this summer.