Senior Spotlight…Stopping to Smell the Roses 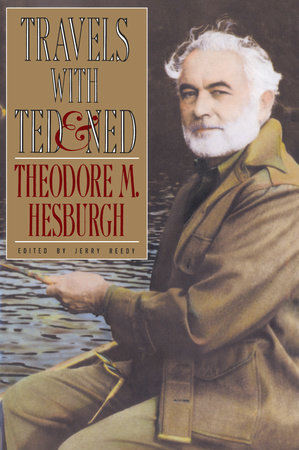 What do Golden Domers do when they retire?  Or rather, what do they WANT to do when they retire?  The answer to these questions may have been first answered in June 1987 when Notre Dame’s President, Reverend Theodore M. Hesburgh (aka Ted) and Executive Vice President, Reverend Edmund P. Joyce started with a premise held in common with many new retirees:  travel.  On June 11, 1987 these two decades-long friends, colleagues and brothers in the priesthood set sale in a massive recreational vehicle for destinations in the western United States.

Their journey was chronicled in Fr. Hesburgh’s book, Travels With Ted & Ned.  In the book, Hesburgh imparts the following thoughts, “I mention these activities not to brag but to assure men and women approaching retirement that it is not a fate worse than death…

Rather, it can be both rewarding and exciting…Too many people take retirement too seriously.  They shut off the lights, lock the door, and vegetate.  Others may drink too many martinis or play too much gin rummy.  That isn’t retirement; it’s quitting while still having much to give, much to enjoy, much living yet to do.

This book, therefore, isn’t just about travel, as much fun as travel can be.  Fundamentally it’s a book about totally changing one’s ordinary, lifelong way of living without coming apart at the seams.  It’s a book about enjoying, not dreading retirement.  And yes, it’s about stopping—stopping, at long last, to smell the roses.  We have done just that.”

Whether or not Senior Alum, John McDonald-O’Lear (Electrical Engineering ’78) used Hesburgh’s book as a guide is not certain, but he and husband Joel Sundstrom (Pharmacy-University of Houston) certainly followed a similar path.  Both retired around the same time and they shared a common desire to travel, but not the plane and hotel route.  They wanted boots on the ground travel that could only be accomplished by hitting the road.

John and Joel’s first BIG decision involved a purchase guided by the principle of “go big or go home.”  They bought a dually-diesel Ford F350 along with a thirty-seven foot fifth-wheel Bighorn trailer.

“We knew that we weren’t going to do local camping confined to a matter of days.  That meant we needed power to tackle mountain climbs and room where we could truly live and not just stay the night.  In fact, we intended to be gone months at a time,” McDonald-O’Lear remembers.

As with the launch of a new ocean-going ship, the pair decided they would “train” through a series of shakedown journeys.  McDonald-O’Lear states, “We did not want to learn on the fly how to navigate, turn, park, back up or hook up.  RV mentors were welcome, but we didn’t want to be obvious RV rookies to the casual observer.”

So the first two years of big rig ownership was all about gaining experience and familiarity with horsepower, length and weight of their venture on wheels.  But the clock was ticking and the wheels were turning.  What would be the first epic trip for these motivated explorers?  The answer was Alaska.

Detailed planning began with a spreadsheet complete with dates, cities, miles, stop destinations, and points of interest to take in.  When finished the spreadsheet covered nearly 12 pages of information covering a journey starting in Phoenix, Arizona traveling up the California coast into Canada to the Alaskan Highway through points in the 49th State (purchased for a mere $7,200,000 in 1867) before returning home to Phoenix, Arizona once again.  This trip would encompass 131 days involving 55 separate stopping points and covering nearly 9,000 miles.  One look at the spreadsheet alone portrays nearly military-like precision that guaranteed logistical success of this first retirement journey.

With planning done, McDonald-O’Lear and Sundstrom began their trek.  On May 23, 2018 they left Phoenix for a short hop of 150 miles to Flagstaff.  By the end of Week One they had made

Further northward progress was made during Weeks Two and Three of John and Joel’s Excellent Adventure as they traveled to Jackson, Wyoming and Yellowstone and Grand Teton National Parks followed by a stop at Flathead Lake in Montana.  While stopped at Flathead Lake the travelers also took in Glacier National Park before crossing into Canada.

The first stop in Canada was at Fort Macleod in Alberta.  McDonald-O’Lear relates, “This was the home to the first members of the Royal Canadian Mounted Police…the Mounties.  Joel and I also visited a World Heritage Site, the Head-Smashed-In Buffalo Jump.”

The duo continued moving through Alberta to Calgary where they visited Banff National Park along with Lake Louise.  Beyond the beauty of the surroundings, McDonald-O’Lear took note of a significant happening, “The sun was setting around 10 p.m. and rising at 5 p.m.  The further north we go, the lighter it stays.”

Just about one month after their departure McDonald-O’Lear and Sundstrom arrived at Dawson Creek in British Columbia.  To date, they have traveled nearly 4,000 miles at this point and find

themselves at the start of the Alaskan Highway.  The Alaskan Highway is somewhat of a natural wonder in a land that leaves every visitor filled with awe with the majesty of its surroundings.  The highway was built during World War II and was roughly 1700 miles long.  While some of the route was “finished” a great deal of the roadway was rough to the point of gravel.  Mile 0 of the highway was and is located at Dawson Creek.  The Official End of the highway is at Historic Marker 1422 in Delta Junction and the Unofficial End is located at Historic Marker 1520 in Fairbanks (the reduction in mileage from the original highway is due to a shortened length resulting from road improvements over the years).

On July 3, 2018 McDonald-O’Lear and Sundstrom wheeled their rig to Whitehorse.  Whitehorse is the capital of the Yukon and is located at Historic Marker 918 on the Alaskan Highway…a little over halfway on the route to Fairbanks.  This part of the journey has been filled with sites and most overnight stops have landed them on the shores of one glacier filled lake or another.  McDonald-O’Lear talks about the animals they have seen, “During daily drives we frequently stop to observe animals on the side or even crossing the road.  We have seen moose, caribou, bears, bison and stone sheep.”

Ten days later, on July 13th, the pair finally hit pay dirt as they crossed over the Alaskan border from Canada.  For John McDonald-O’Lear, this officially marks the 50th U.S. State that he has visited

during his lifetime.  In quick succession, the two travelers visited Tok, Delta Junction, and Fairbanks.  Then there was a quick trip to North Pole (not THE North Pole) and a long day trip to the Arctic Circle…and a long trip it was as the sun never set.  The final stop on this leg was Denali National Park where several days of hikes and sightseeing can’t begin to capture this truly one-of-a kind place.

From Denali, John and Joel headed toward Anchorage followed by three stops on the Kenai Peninsula…Kenai itself where they observed drift netters catching salmon, Homer where they observed an eagle nest complete with eaglet, and Seward of Gold Rush fame where they toured by boat through Kenai Fjords National Park.

Next up was following their planned route to Valdez and participation in the annual Gold Rush Days that were taking place.  After which there was a return to the Alaska Highway in order to

arrive at Haines…perhaps the most daunting part of the journey as the travelers were required to back their big rig sixty-three feet down a ramp and onto a ferry for a two-day sail to Prince Rupert in British Columbia…but only after a plane tour of Glacier National Park.

After motoring through British Columbia, John and Joel continued down the west coast arriving back in Phoenix, Arizona on October 1, 2018.  The trip that was so carefully planned had come to a successful conclusion…but not an end.  This trip led to an extensive trip of the upper Midwest of the U.S. in 2019.  Which in turn led to planning a full blown caravan to Alaska in 2021 with nine big rigs traveling together with eighteen friends participating.

When asked about lessons learned, Joel Sundstrom had an interesting observation, “It didn’t take long to realize that if we were going to really enjoy this type of travel, we needed to focus more on the experience and less on the miles.  As a result, we committed to driving somewhere around four hours a day, and we left the rest for exploring.”

Just as McDonald-O’Lear and Sundstrom came full circle in their trip to Phoenix to Alaska and back, so does their reflection of the journey echo the paraphrased words of Father Ted found at the beginning of this story:

Their journey, “therefore, isn’t just about travel, as much fun as travel can be.  Fundamentally it’s about totally changing one’s ordinary, lifelong way of living without coming apart at the seams.  It’s about enjoying, not dreading retirement.  And yes, it’s about stopping—stopping, at long last, to smell the roses.”  John McDonald-O’Lear and Joel Sundstrom have done just that.

Editor's Note - If you have an interesting story to share and would like to be featured in a future "Senior Spotlight", contact Joe Hornett at goldendomer@alumni.nd.edu.