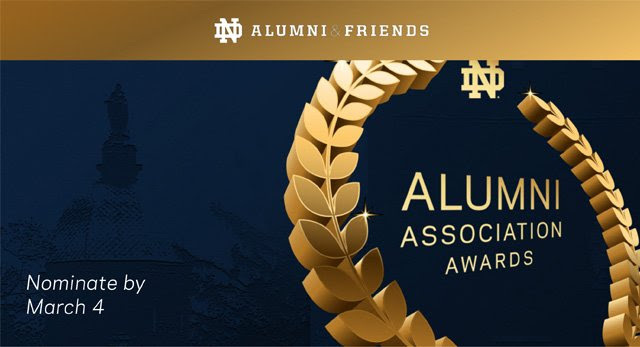 Now is your opportunity to help honor distinguished Notre Dame alumni, friends, faculty, and staff for their contributions to the University, the Alumni Association, and the world.

Nominations are now open for the following awards.  Click on the award title to read about past recipients and/or to nominate someone.  Nominations close on March 3.

The Rev. William Corby, C.S.C., Award--Established in 1985, the Rev. William Corby, C.S.C., Award is conferred on an alumnus/alumna (living or deceased) who has distinguished himself or herself in military service. The award is presented in honor of Notre Dame's third president, who was a celebrated Civil War chaplain of the Union army's Irish Brigade.