Meet Leah Corachea ‘14, the woman who helped transform the student phone center into ND Listens, a place to connect and engage alumni, friends, and family with students and campus life. She shares what it’s like to be a first generation immigrant and college student, who also happens to be a fourth generation legacy student. Read on for more about how ditching the script opened the way for some great conversations with alumni - including one about a tug of war with a baby elephant on South Quad...

What drew you to Notre Dame?

I was born and raised in Manila by my biological family. I lived in the Philippines until age 11 when I moved  to Chicago where an American couple welcomed me into their family. My adoptive mom graduated from ND in 1986 so we would come to campus all the time, run around South Quad, go to all the games. I’m actually a fourth generation legacy student. Interestingly, I’m part of one of the oldest families at Notre Dame and yet I’m also a first generation immigrant and college student.

What was it like adjusting to Notre Dame as your new home? How did the experience shape you?

I think I had imposter syndrome. In some families, just being at Notre Dame would be an amazing achievement. In others, like my adopted family, being at Notre Dame was expected. It was the norm for four generations. Those two ideas combined created a time of contradiction for me. It took me a really long time to accept that it was ok to do Notre Dame my way and to be different.

What inspired you to stay at Notre Dame and start your career on campus after graduating?

I received a scholarship during all four years of my Notre Dame experience, so as a senior, the Development Office emailed me, asking me to send a thank you letter to the donors who made my scholarship possible. I knew I wanted to give back in some way after college -- and working in the Development Office allowed me to do that and gave me the opportunity to meet our donors face-to-face. I started as a receptionist, and from there joined the Learning and Organizational Development team and then eventually moved to Annual Giving where I work now.

One of your jobs on campus was leading ND Listens, previously known as the Call Center. ND Listens is very different than the Call Center used to be. Can you tell us about that change and the reasons behind it?

I took over the team when it was still the Call Center. It didn’t take me long to notice a few things. First, the pick up rate was extremely low. If you called 200 people, maybe 2 would answer. Secondly, those answers were often a quick hang up or someone saying they didn’t want to give to Notre Dame.

I felt we could be utilizing the student callers in a different way. We had an opportunity to establish a relationship between a current student and an alumnus. What happened when the alumni were on campus? What advice did they have for current students?  We needed to be building connections instead of having transactional conversations.

What preparation or script were the students given to move to that new conversational approach?

Moving to a new approach was a team effort. I relied upon the student workers as much as they relied on me. We got rid of the scripts. The students are smart enough to come up with conversation starters themselves! We broke the alumni contact lists into different groups. For example, if it was a student’s birthday that day, they could be given the list of alumni with upcoming birthdays to call and give their best wishes to. Students would also call to thank alumni for recent gifts. Sometimes students would call to reminisce with alumni about campus events.

I’m no longer in the role and it has certainly expanded since my time there. The team has gotten really creative with their outreach and is on Instagram now, with an account called ‘Domers on a Bench’ @domersonabench that shares student stories.

It sounds like ND Listens is all about conversations. What are some of the most memorable conversations you were a part of or heard about from students?

One of the things I love and miss about ND Listens is the unpredictability of it all. You never know who you are going to connect with. There have been moments where we have called at just the right moment and it has really deepened the alumnus’s or alumnae’s relationship with Notre Dame. 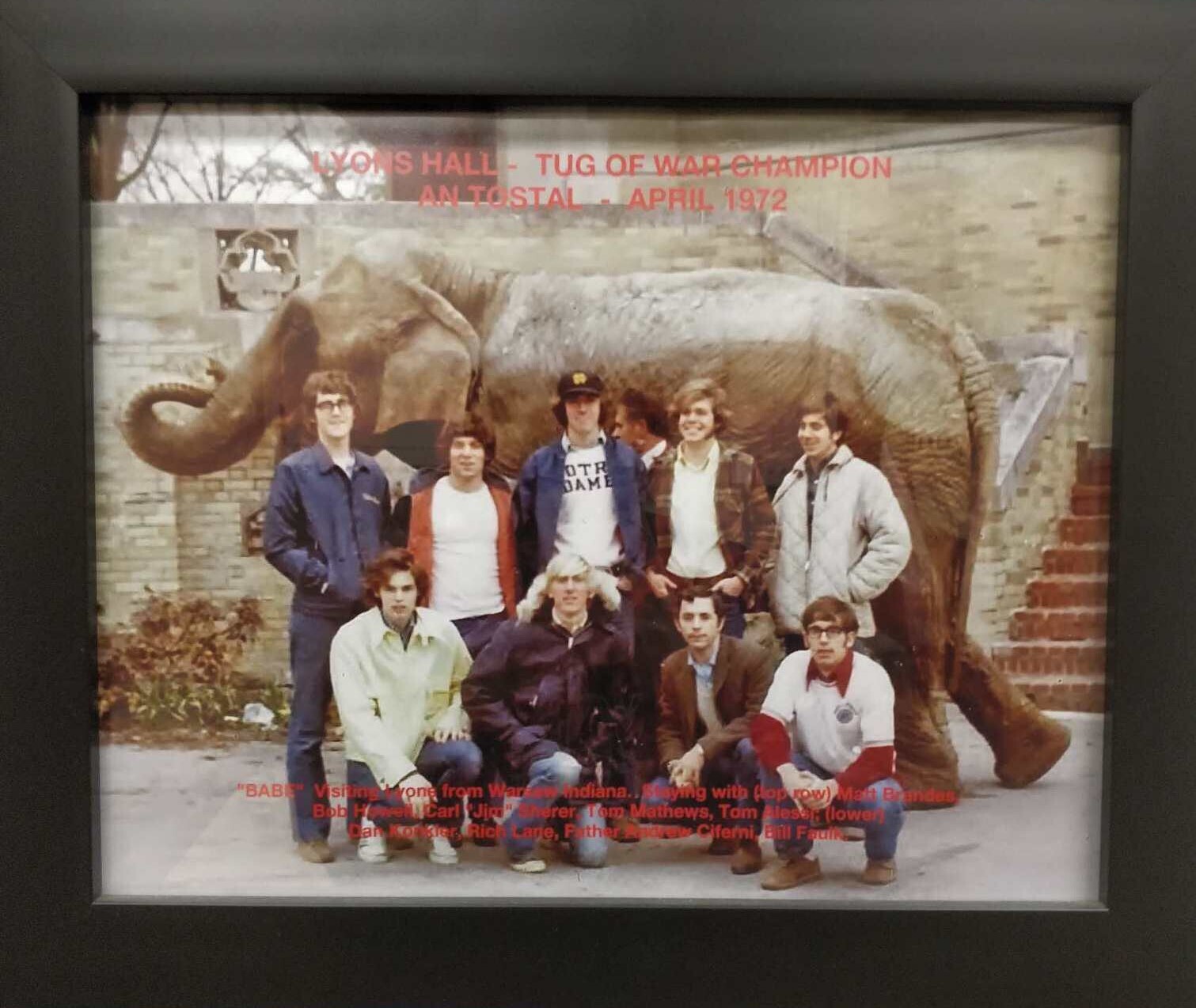 My first favorite story is about a tug-of-war contest that happened on South Quad in the 1970s. A group of guys from Lyons decided they were going to win the contest no matter what. They did some research and learned there was a travelling circus coming through South Bend. They pooled their money to rent the circus’s baby elephant for a few hours to be on their tug-of-war team. I thought the alumnus telling this story on the phone had to be joking and there was no way an elephant would have been allowed on South Quad. But sure enough, I was able to find a picture of it.

My second favorite story is a very sobering one. We spoke to an older alumnus who told us we should never take being on campus for granted. He talked about the last time he came back to ND. He knew, given his age, he was not going to be able to travel to campus again, and so he took his time walking around, went to all his favorite spots, and said goodbye to the Dome. It’s really powerful for a current student to hear that, to think about the last time they will ever see the Dome. It was a reminder for us to really appreciate where we are.

Can you tell us a bit about the ND Parents program you worked on? What about Notre Dame parents has inspired you and what do you hope to see from them in the future?

I worked on the ND Parents program for about a year and a half. One of the things I love about parents is how excited they are to experience Notre Dame, whether again, if they are alumni themselves or already had a child attend, or for the first time.

In the ND Parents role, I sought to engage parents and allow themI them to feel the same sense of community that we all share as alumni.The year I took over the program was the year my adopted brother became a freshman at Notre Dame. I felt more pressure since I felt I was kind of creating my parents’ experience as ND parents.

You’ve already held many positions at the university, but if you could have someone else's job at Notre Dame for a day, whose would it be and why?

I would be an academic advisor because I remember the imposter syndrome I felt early on. When I got my fall midterm grades back as a freshman, I think I got all Cs. I was freaking out. So much of my life in America was all about getting into college, but it never went past that. When I got all Cs on my midterms, I went to my first year advisor and said “I’m sorry. I shouldn’t be here. I’m failing all my classes and can’t keep up. It was a mistake that I was accepted here. I just need your help to transfer all my credits so I can go home”.

Before saying anything to me, she opened the door and told her assistant to cancel the rest of her afternoon appointments. She sat me down and told me, “You got into Notre Dame for a reason. You are meant to be here, so now let’s go through all of your classes and we are going to talk through how you are going to bring every grade up.” It was at that moment I thought I may be able to do it. It made all the difference in my world.

I’m sure that this is a trying time right now for academic advisors, helping all of these students, but I hope it is also rewarding . I still talk to my first year advisor, Angie Chamblee, ten years later. It was definitely a moving moment for me.