Earlier this year, when social distancing policies were being put into effect, the Alumni Association asked alumni clubs and classes to halt in-person activities until at least August 31st. Senior alumni who already had meet-ups scheduled were faced with two choices – either shut things down or redefine “meet-up.”

In the true tradition of “You can’t keep a good Domer down,” many opted for the latter.

A number of local senior alumni groups decided to go digital and gather their peers together via Zoom. Jim Gradoville ‘76 in Portland OR and Jim Hynan ’74 in Chicago sent out invites to all nearby seniors and have led online conversations that covered a range of topics, including football, how everyone was doing, and what other virtual events might be of interest.

In that same vein, local members of the Class of ’69 have been meeting for breakfast at a deli in Milwaukee every month for over eight years. The group began with four members and has grown to 15. Their last face-to-face meeting took place in February, and Zoom meetings began in April. “Our sessions last about an hour,” states John Hickey ’69, Regional NDSA Director. “Participants take five minutes or so to update us on their doings for the past month and about upcoming events. In our last session, we started talking about whether there would be a football season.”

In Knoxville, seniors enjoyed a virtual book discussion and a virtual happy hour.

Instead of being “less than,” these digital events are receiving very positive reviews. “A lot of seniors within the groups are enjoying their Zoom/Hangout experiences,” explains Mary Ann Topping ’79, Regional NDSA Director for Illinois. “It has allowed them to get to know other alumni that they wouldn’t normally sit by during their monthly breakfast or lunch events. In the past, being creatures of habit, they’ve tended to sit by the same people or in the same location.”

Topping also notes that these virtual activities have encouraged coordinators and participants to increase their tech skills and knowledge, which can be very empowering.

But still, for older alumni, the social distancing can get lonely. In Phoenix, Tom Ross ’74, who normally coordinates the monthly senior luncheons, has been staying in touch with his group by sending regular video messages that cover updates, announcements, and lots of positive encouragement.

Then there are the grads who have already established a digital connection and are now intensifying it due to the pandemic. “About 15 seniors who lived in Zahm during the 70’s have had their own website for over 20 years,” explains Gary Sobolewski ’74, NDSA Engagement Chair. “In addition to general chatter, we have fantasy leagues for baseball, football, golf, and some others. Since the pandemic hit, we’ve been doing weekly Zoom calls to stay connected. And we just started weekly virtual poker. Every Thursday, we do Texas Hold ‘em. It’s a great way to keep in touch, have a little friendly competition, and give each other some grief!”

All of these forays into virtual socializing have evolved from already-established monthly or quarterly senior alumni activities. But leave it to the Class of 1980 to leap to the next level and craft a full-featured Virtual 40th Class Reunion!

Many Notre Dame grads were deeply disappointed this past spring when it was announced that Reunion Weekend 2020 was canceled. Facing a milestone 40th reunion, the Class of 1980 created and hosted what’s believed to be ND’s first-ever virtual reunion.

“A group of us had the idea of a virtual event in a thread on our Class Facebook page,” states Mary Ellen Woods ’80. “The orig 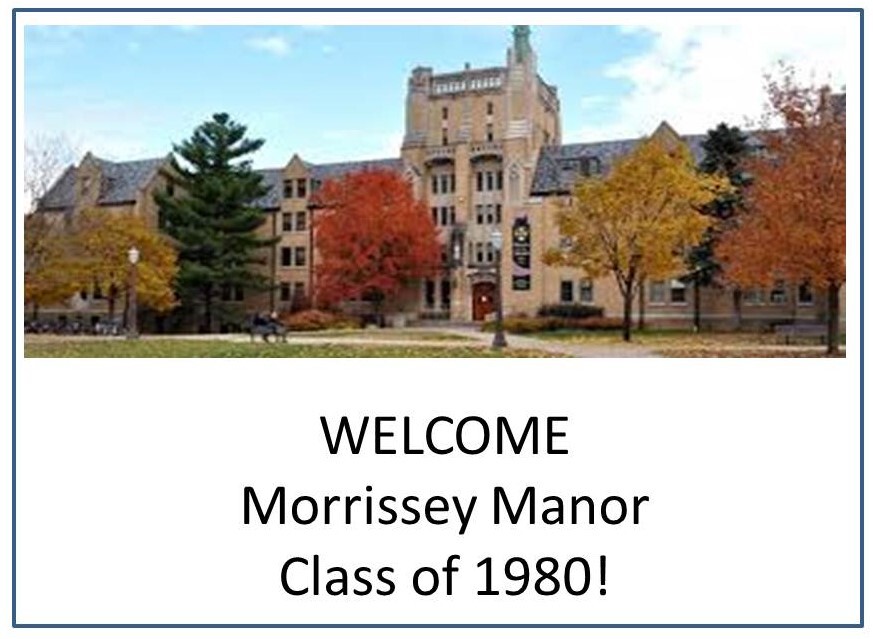 inal group – including Chris Lyons, George Quill, Jay Ferriero, Leo Latz, and I – met with the Alumni Association to propose that ND organize an alternative to the traditional reunion. They declined at the time. Instead, we opted to do so ourselves.”

Great minds, same track, etc.  At the same time the class officers were discussing a June 25th virtual reunion, some ’80 grads from Morrissey Manor were planning a May 30th Reunion Happy Hour for Morrissey classmates via Zoom. The Morrissey men touched base with the class officers, learned that there would be no conflict on dates, and moved forward accordingly. Their event attracted forty-six 1980 Morrissey grads and their 93-year-old rector, Brother Ed Luther. “It was an unparalleled success,” says Ken Kadleck ’80, the Morrissey reunion coordinator.

Meanwhile, the big class event really began to crystallize once the planning committee began working with Salvi Media, run by two Class of 2013 alumni. 250 people ended up joining the June 25th gathering and enjoyed the packed 75-minute agenda. A video montage was created from over 1,000 photos that were collected via Facebook. Dolly Duffy ’84, Executive Director of the Alumni Association, gave an update from campus. Their class chaplain, who was based in Peru, said Mass. And three alumni guests gave remarks. They included Seattle mayor Jenny Durkan, National Immigrant Justice Center executive director Mary Meg McCarthy, and former Fighting Irish running back Vagas Ferguson. Former Glee Club members wrapped up the reunion with the Alma Mater.

When asked what advice she would give other classes who are interested in doing something similar, Woods didn’t hesitate. “Do it. We got new people involved and had great fun. FYI, the Salvi Media support was essential to our success. We couldn’t have done this without their help and expertise.”

The bottom line?  Notre Dame is a family. And whether it’s reunions, lunches, book discussions, or happy hours, it’s clear that Notre Dame seniors are making the most of today’s technologies to create and maintain those all-important Domer connections.

If you’re interested in talking with a Class of 1980 grad to learn more about how to create your own class reunion or happy hour, email us at goldendomer@alumni.nd.edu, and we’ll put you in touch with one of their organizers.