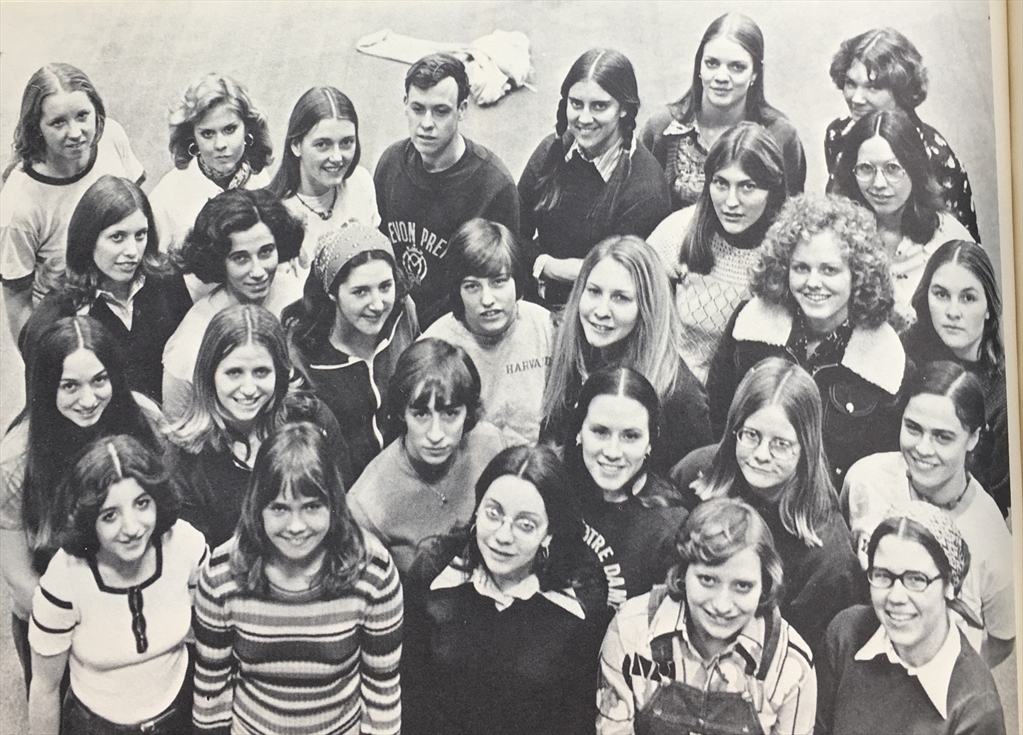 As we prepare to celebrate 50 years of undergraduate coeducation in 2022, travel back a few decades and enjoy a handful of sometimes silly, sometimes shocking anecdotes.

I entered the University as a wide-eyed freshman from rural Pennsylvania in August 1979, with my sights set on majoring in Engineering. On the first day of class, I headed to Cushing Hall for my 8 am. After first mistakenly entering the Law School building next door, I finally found my classroom in Cushing. I was early and quite nervous, and decided to make a stop at the Ladies room before entering the classroom.

I walked through the door and I found myself staring at a row of about six urinals! I was completely flabbergasted and thought for sure I had made a mistake, and turned to exit. On the back of the door, in big letters, was the sign "Men." I went out and looked at the front of the door -- it said "Women." Apparently, that's all that had been done to convert a Men's restroom to a Women's restroom.

I pursued my Chemical Engineering degree. At the time, about 25% of the student population was female, but in Engineering, it was about 1 out of every 7. I loved my time at Notre Dame, and my experiences there prepared me well for all the professional challenges to come. Most importantly, I formed life-long bonds with the best friends one could ever want.

We put speakers in our window at Farley and blasted "I am Woman (Hear Me Roar)" by Helen Reddy as loud as we could after Billie Jean King beat Bobby Riggs in tennis. In a matter of minutes, there was a mob of men outside our dorm. Sr. Jean made us turn it off.

One night when the guys were streaking, they came to our dorm. Sr. Jean met them at the door and said, "You can't come in here dressed like that."

I joined the ND-St. Mary’s women’s fencing club in my freshman year, having tried fencing in high school but really with no experience to speak of.  The legendary Mike DeCicco was our coach and we practiced with the men’s varsity team, 2 hours a day. Tom Coye, the assistant coach under DeCicco, was in charge of the women’s team among other things.

It turned out to be the source of so much of my ND pride, sportsmanship, memories, and lasting friendships.  Women’s fencing became one of the two first teams, along with women’s tennis, to go varsity.  So I was lucky enough to be in the right place at the right time, as one of the first five women to get a varsity letter from Notre Dame.  I still have my letter jacket and letter sweater from junior and senior years.

There were so many priceless moments between 1972-1976. Imagine sitting in a classroom when the doors burst open with TV cameras catching the moment when these rare female creatures are actually attending classes at ND. You were the only female person in the class.

One time, my roommate contacted her PE teacher to tell him she could not attend swimming class because she had her period.  The PE teacher had no idea how to react.

The Panty Raids in Badin Hall 1974: ND men storm the women’s dorms in search of underwear! Many guys hollering and pounding on doors. I always shut my lights off and pretended no one was in my room. That was a strange ritual which I hope has now disappeared from campus.

Some of my most vivid memories relate to the co-ed gym classes.  I’m 5 foot tall and not athletic, and I remember the volleyball rotation, standing at the net (men’s regulation height) with the instructor repeatedly making me try to jump high enough to get above the net and spike the ball.. I didn’t learn to spike - and I’ve never wanted to play volleyball again!

Thank you to all who contributed! We want to hear from all of you pioneering alumnae — about the swim test, the dining hall, being the first (fill in the blank) —  as we prepare to celebrate 50 years of undergraduate coeducation in 2022. If you are interested in participating "In Her Own Words," please let us know.

Help us shape this project and record history! We'd love to see more pictures of life on campus during the '70s and '80s, like this one of Women's Crew Team from the 1975 edition of Dome.